Whilst training lifeguards in Botri, I was introduced to Ahmed, whose younger brother, Mohammed, had drowned in the Nile in 2014. He took me to meet his sister, Yasmin, and together they told me their story. 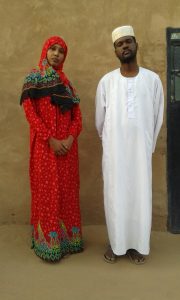 “Mohammed was 18 at the time. He would go swimming every day with his friends though he would always deny it if you asked him. Our mum had made us promise that we would never go in the Nile because she thought it was dangerous but lots of the boys from Botri would swim anyway.

That day, there was a ceremony taking place not far from the water. Mohammed was part of the ceremony and the last time that we saw him he was on the stage doing his part. It seems that him and two of his classmates, Ali and Farouq, snuck away from the event to go swimming in the Nile. It was half an hour before anyone noticed that they were missing.

They left their clothes and phones on the bank and they decided to swim across the river. At about 5:45 in the evening, it was starting to get dark and they started to swim back. Ali got into trouble in the middle of the river. Someone on the far bank heard him screaming and then the screaming stopped. Farouq swam over to Ali to help him and he was pulled under the water. Mohammed tried to help both of them. He was the last one to drown.

One of our neighbours was by the river but he was not a strong swimmer. He ran back to the village for help. By the time he returned with others, there was no sign of the three boys apart from the pile of clothes on the bank. We searched for them for a long time but everyone was too scared to go in the water to hunt for them. We did not find the bodies until the next day when the Civil Defence recovered them further down the river.

Nothing has changed since then. Nobody has done anything to stop it from happening to someone else.”

Ahmed is now a trained assistant beach lifeguard and along with other young men from his village is hoping to make the Nile near Botri a safer place.