On the 28th of December, 15 Nile Swimmers’ instructors headed to a very beautiful and quiet village, located in the south of Khartoum city, at the request of the Butri Charity Association (BCA). The Association is composed of young people from the village, and works to serve the village, to improve the community services and to advocate on behalf of the people of the village.

The BCA call to the Nile Swimmers to raise awareness of water safety in Butri area came after repeated cases of drowning among children from the village, especially those of school-age.

The initiative came from the people of the region themselves, which indicated that the people in Butri were aware of the dangers of the water without having the right knowledge and skills to stay safe. It also demonstrates the success of Nile Swimmers in spreading the water safety messages, which is a goal that we have been working to achieve since beginning in Sudan in 2007.

Training began on time as planned, at 11:00 am on Monday 28th December 2015 in Butri primary school and Butri secondary school. In attendance, all were ready to start, the school’s management, the students and the members of Butri Charity Association who deserve the greatest credit for the success of this initiative and in facilitating and coordinating between the Nile Swimmers’ team and all the stakeholders in the region.

The water safety messages were taught to a total of 1677 people including girls, boys and mothers. After we finished the awareness training, we had a debate with the mothers exchanging ideas and opinions. One of the mothers had the chance to tell her story about how she lost her 10 years old son who drowned in the river. More sad stories referred to 6 young men who had drowned in the past year. 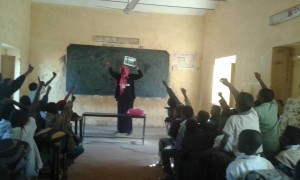 The awareness program ended at 6:00 pm. It was a very long day, but the Nile Swimmers working team was very pleased with the outcome saying that it was a very useful experience that added a new dimension to all of them.

With our promise to the people of Butri village and the coordinators of the initiative to continue to cooperate and contribute to finding  solutions to reduce drowning in this region, members of the working group left that day with renewed passion and commitment to the Nile Swimmers, to continue raising awareness and disseminating water safety messages across a wide range of areas of Sudan.