Botri is a village of about 5000 people, 20 km outside of Khartoum in Al-Jazeera state. In December last year, the Botri Charity Association (BCA) approached Nile Swimmers asking for help to combat the community’s self-identified drowning problem. In late December, Aquatic Survival Programme instructors went to the local primary and secondary schools to teach water safety messages to the children of Botri. They also attended a women’s group to teach the mothers of the village the same messages, in order to help keep children too young to be in school safe around the water. 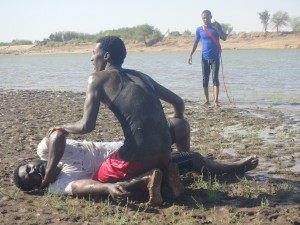 This week, a team of Nile Swimmers river lifeguard instructors spent four days training some of the young men of Botri the rescue skills needed to keep their local beach safe on weekends and public holidays. This is the first river lifeguard course we have run entirely with Sudanese trainers and BCA were extremely pleased with the Nile Swimmers instructors and vital skills they taught the course participants.

It was not all plain sailing though. On the second day of the course, a very angry man came down to the beach to try to put a stop to our training. He told us that this part of the river was where the devil lived and that it was the devil who made people drown there. He accused us of coming into the village as outsiders, stealing their children and leading them to the devil. This is an old Sudanese belief and is not uncommon, particularly amongst older people. He did not succeed in stopping our training session but he did take his son, Abdullah, one of the course participants, home immediately. Abdullah argued furiously with his father as he left the beach.

The next morning Abdullah returned to the course and apologised for missing the following afternoon. He told me that he had explained to his father what the course was about and how it could stop people in Botri from drowning. Whether or not his father was convinced that his son would be safe from the clutches of the devil in the Nile is unclear. However, the fact that Abdullah was allowed to return to the course and completed his training to become one of Botri’s first river lifeguards suggests that slowly we might be starting to change people’s attitudes todrowning along the River Nile.