Since our very first course over 9 years ago, we have been working with the Civil Defence to improve safety around the Nile in Sudan.  The first few courses had a few people from the Civil Defence participating, but in a relatively unstructured ad-hoc way, without a clear route for cascading training or a longer-term sustainable approach.  In 2011, we officially signed a Memorandum of Understanding between us, the Sea Scouts, and the Civil Defence, and we were able to get access to the data they collect about the number of bodies that they recover from the Nile.

As a government body, the positions of authority within the organisation are political appointments, and so despite enormously promising talks in 2011, progress stalled as key staff changed. 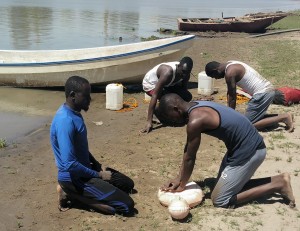 The relationship was reinvigorated in 2015, and we were requested to develop a specific training programme for their river based staff, as well as looking at a wider command and control structure.  Yesterday, we successfully completed the first pilot course training six officers (from six states) in rescue boat operator skills, CPR, First Aid, beach rescue techniques, and basic fault-finding and engine maintenance. 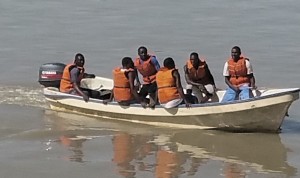 Previous courses that the Civil Defence have attended have included our river lifeguard course, and our aquatic survival instructor course.  Whilst overlapping with their areas of responsibility, these courses did not align closely to their typical work.  The newly developed course has been designed especially for the Sudanese Civil Defence and techniques take into account the resources and equipment that are available to them.

The pilot course was very successful, and the six candidates are excited to return to their colleagues in the states to share their new knowledge.  On the final day we had some interesting discussions about models for expanding and developing the programme.  The next (refined) course starts tomorrow with six soldiers.