Having discovered that the brick-making community at Botri were not considered by the local residents when they talked about drowning and that they were potentially at much higher risk of drowning because of their increased exposure to water, we decided to see if we could find out more. We went to see the brick-making process with the owner of one of the factories.

The owner himself did not seem to think that drowning was a problem amongst the brick makers and when we spoke to some of his workers, they agreed with him that sometimes people drowned but it was very uncommon. We carried on talking about how the bricks are made and eventually the owner got bored and wandered off to inspect other parts of his process. With him out of the way, we checked that drowning was not a problem in the community. This time, the truth came out. 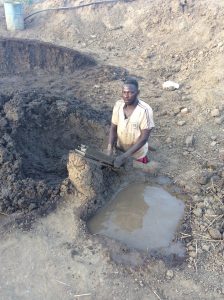 “I have worked here for 10 years and drowning is a very big problem. Most of the people who work here are from Kombo [a large slum area on the edge of Khartoum] and they have never been near the Nile before they come here. They come here and they have to use the Nile for everything. They wash in the Nile, they get water for drinking and cooking from the Nile and they wash their clothes there. They do not know how to swim and they stay in the shallow water but it is very easy to slip or to step into an area where the water is deeper than you think. People drown here, maybe six or seven each month. We tell the supervisors when someone drowns and they are supposed to tell the Charity Association and the owners. The supervisors know. I do not know if they pass on the information.”

With nearly 7000 brick makers working along the banks of the Nile at Botri, having six or seven people drown each month is a staggering rate of drowning, and one which goes entirely unrecorded. More troublesome is that Botri is not unique for having brick works along the banks of the Nile. The banks of the Nile as it flows through Khartoum State is littered with thousands and thousands of these places. The vast majority employ migrant workers from Kombo and similar areas and it is unlikely that any have a better system for protecting their workers from the danger of daily exposure to the Nile. Despite the lack of local drowning hazards, the population of Kombo probably has one of the highest drowning death rates in Sudan.