The White Nile is wide and slow here in Kosti, with shallow banks that suddenly drop off into deep water. 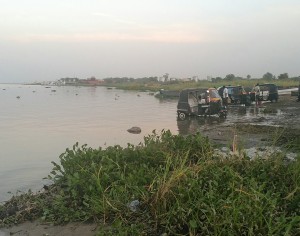 Some sort of water lily type of flower indicates the shallower waters, and this is where the Sea Scouts come to swim, the rickshaw drivers come to clean their rickshaws, and kids come to play.

Ramadan (a Nile Swimmer graduate from 2011, and Kosti Sea Scout leader) told me how sometimes when they come here to teach the Sea Scouts to swim, the Civil Defence are searching for a body, and they ask the scouts to help.  I cannot imagine what effect that might have on a young teenager during their early exposure to the water.

Whilst we were looking around, two rickshaws, a pickup truck, and a minibus came zooming in, packed full of excited ululating women.  The rickshaws whizzed around in circles, kicking up dust, much to the delight of the half-dozen children crammed into each of them.

As women poured from the vehicles, there was a definite party atmosphere with a lot of singing and dancing.  Mai explained that these women were from Darfur, she could tell by the song and the style of the dancing.  They were performing an old Sudanese tradition.

One of the women had given birth, and had been confined to her house to care for her baby for 40 days.  On the evening of the fortieth day, all of the women from her family come and take her to the Nile for her to wash herself & her baby.

The origins of the tradition were not explained to me, but for the 20 minutes or so that the women were there, they had a great time.  I don’t think it is possible to underestimate how much the lives of Sudanese people are affected by the Nile.